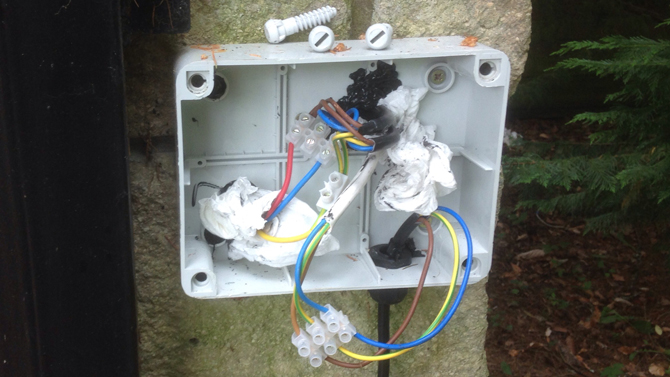 After a small electrical firm in Perth installed a full gate automation system for our client, it didn’t take long before the entire system stopped working.

The system included two on-gate motors, two photocells, decorative and flood lighting on the driveway and a Control Board.

Auto Entry were called and we were shocked as soon as we uncovered the different parts of the installation. An oversized Miniature Circuit Breaker (MCB) had been used in the consumer unit, PVC Twin & Earth cable had been used for the external installation, the Circuit Protective Conductor (CPC/Earth) wire had been cut away, there were many IP breaches on all of the external enclosures, there was evidence of some attempt to seal the IP breaches with tissue paper and roofing sealant and worst of all; there were melted cables inside one of the adaptable box enclosures.

We immediately condemned the installation and isolated all power to the system. After a thorough investigation we recommended our client have a full Electrical Installation Condition Report (EICR) and the entry system re-installed.

In light of their plight, we priced lightly and advised on a course of action to seek compensation.