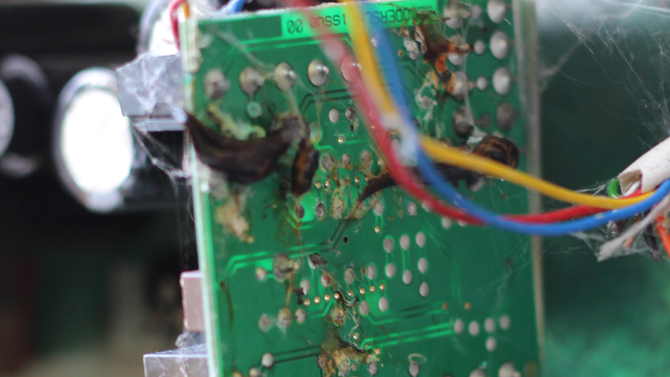 A desperate call from a customer near the Scottish Borders called to ask us to attend and diagnose a fault with his electric double swing gate system.

Having lived at the property for only a year, our client battled on with a temperamental system when it finally gave up the ghost and left the gates permanently closed.

An engineer was sent out and it didn’t take longer than 3 minutes to diagnose multiple issues. Every enclosure was sellotaped together and had many IP breaches which allowed wildlife to take hold.

The system was a very old 1990’s FAAC device which performed well to survive as long as it did. As we opened the first enclosure, hundreds of wood lice and spiders fell out exposing a cob web ridden control board and slugs melted to the PCB’s. Each of the underground operators were suffering IP breaches, severe corrosion and water logging.

There was certainly nothing that we could do to assist this unlucky customer the same day but a quote has been issued for a complete overhaul of the system.